March has come and gone, and with it - a new game!

This month's One Game a Month submission took me way out of my comfort zone and into three dimensions. It's not often I make 3D games as I don't really have a head for maths, but I forced myself to give it a go and I'm really glad I did.

The idea to make a "Pseudo-3D" racing game started a year or more ago when I was linked to Lou's Pseudo 3d Page. As a childhood fan of racers like Outrun and Lotus Turbo Challenge, I really fancied the idea of making a game in the same style.

However, the one game I really wanted to emulate above all was Power Drift, my favourite of all the not-quite-3D racing games. I intend to write a blog post that goes into detail on the engine I came up with, but the gist of it is that I ended up ditching the idea of emulating the sprite-based pseudo-3D in favour of an actual 3D engine that emulated the look of pseudo-3D (which was trying to emulate real 3D). 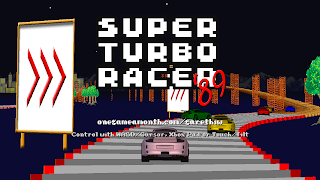 The gameplay took a bit of a backseat this month. I'm not particularly happy with the handling of the car or the AI of the rival cars, they're functional rather than fun. This month it was all about challenging myself to work in 3D, and making an attempt to emulate the graphical style of Power Drift.

I'm really happy with the way it turned out, and I feel more confident that I could use stylized 3D graphics in future games. Next month, I'm hoping to finally release Dreamland as my 1GAM submission. There's also Ludum Dare on the last weekend of April, and I'm due to take part in the 72-hour Jam contest. The product of the jam will most likely be the basis for May's 1GAM submission.

Super Turbo Racer '89 was created in six weeks, beginning with a prototype on the 13th February (during development of GravWalker). I took it easy for the middle two weeks of March, though. I'd estimate there's around 70 hours' work here.

Windows version is ready. If it doesn't run, you may need to install OpenAL.

And Linux. This has been tested on Linux Mint 14 (Cinnamon), you may need to install libSDL-mixer (sudo apt install libsdl-mixer1.2). If still no joy, run from a terminal (mono SuperTurboRacer89.exe) and copy/paste the output into a comment below.